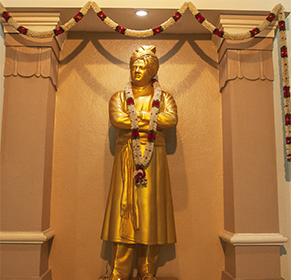 To enable people to discover the inherent potential in them, nuture and utilize it for the benefit of the common good was the vision of the great patriot saint Swami Vivekananda. To take this vision of swami Vivekananda to the younger generation , on 11th july, Bharatiya Vidya Bhavan launched its dream project of the inauguration of Vivekananda study centre in 150 schools. Swami Virabadranandaji formally inaugurated the Vivekananda study centre of BVB School,R.S. Puram and distributed the badges to the volunteers of the forum.

The forum which comprises 60 volunteers meets every fortnight for an hour and undertakes a variety of activities, which includes meditation, talks by eminent speakers, and speeches by student – volunteers, group discussion and singing.

The years 2012 and 2014 were remarkable in the annals of the Bhavan’s schools at Coimbatore. They witnessed celebrations in commemoration of the 125th Jayanthi of our founder, Shri K.M.Munshi, the Platinum Jubilee year of Bharatiya Vidya Bhavan, and also the 150th Jayanthi of Swami Vivekananda. The two major events were the opening of Vivekananda Study Centres in 200 educational institutions in and around the city to carry the message of Swami Vivekananda to two lakh students and unveiling of the life size statue of Mahatma Gandhi in the Bhavan’s school campus at Ajjanur. To add a feather on the cap, a magnificent life-size statue of Swami Vivekananda was unveiled at the Bhavan’s R.S.Puram Campus on the 7th of January 2014 by Swami Abhiramanandaji Maharaj, Secretary, Ramakrishna Mission Vidyalaya, Coimbatore. This auspicious event was well attended by the prestigious people of Coimbatore; Monks from the Ramakrishna Math and general public also graced the occasion.

The most awaited moment of the day the unveiling of the Statue of Swami Vivekananda by Swami Abhiramanandaji Maharaj will be etched as an everlasting memory in the minds of the fortunate people who were present.

The aarthi and lighting of the lamps reflected rays of positivity in the audience gathered. Later, Swami Vivekananda’s three minute Chicago Address was played which heightened the spirit of the awe-inspiring occasion.

The Bhavan’s Chairman Shri.B.K.Krishnaraj Vanavarayar expressed his pride in the contribution of the Bharathiya Vidya Bhavan in bringing about a cultural renaiassance. He stressed that the Bharathiya Vidya Bhavan stands out in imparting ‘Man Making Education’, as advocated by Swami Vivekananda. He said that he may guide us and inspire us in our everyday life. The chairman concluded by saying that taking these values to the students would be sowing the seeds of a new India of Global status, rooted in Bharatiya Vidya.

“Think Vivekananda to become Vivekananda”, was the keynote address of Swami Abhiramanandaji Maharaj, the Chief Guest of the day. He appealed to the students to imbibe the values of Swami Vivekananda.